When President Trump was in the White House, he honored our fallen men and women in uniform.

He regularly saluted the caskets draped in American flags as they were transported.

But under Joe Biden, there doesn’t appear to be respect for our fallen heroes.

The caskets of the fallen marines have arrived from Afghanistan.

But no one from the Biden administration bothered to show up and greet them.

Biden himself wasn’t there.

He didn’t even send someone in his place.

TRENDING: Is Something Wrong With Hillary Clinton?

See the heartbreaking video of our fallen heroes arriving home and none of our “leaders” being there to pay their respects.

Compare this to when President Trump was in charge.

Whenever troops died in Afghanistan, he paid his respects to the dead.

In 2019, fallen troops were flown back to America.

President Trump made it a point to show up and salute our fallen heroes.

See the picture below: 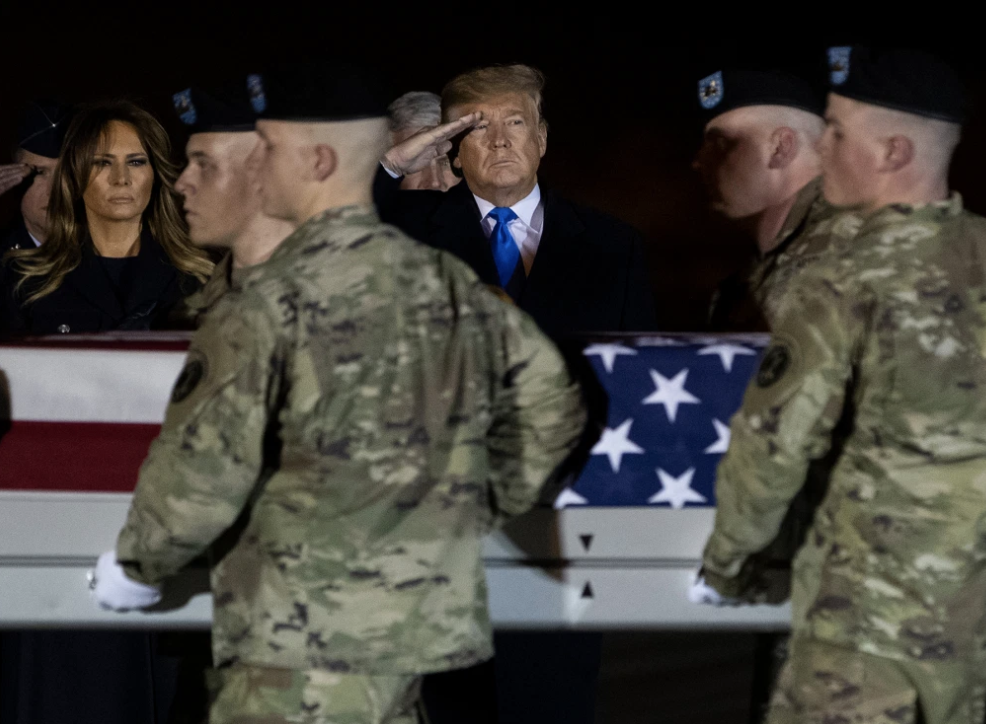 The New York Post confirms that Trump greeted caskets of fallen troops who served in Afghanistan:

President Trump and first lady Melania Trump on Thursday met the caskets of two soldiers killed Wednesday in a helicopter crash in Afghanistan.

The first couple went unannounced to Dover Air Force Base in Delaware to salute the remains of fallen heroes David Knadle, of Texas, and Kirk Fuchigami Jr., of Hawaii.

The president and his entourage stood at attention as six military personnel in Army fatigues, white gloves and black berets lifted flag-draped transfer cases into a van.

In the midst of the worst Middle East crisis in nearly a decade, Joe Biden couldn’t be bothered to honor the dead.

No one from his administration came to welcome our fallen heroes home.

It is one moment that really upset the American public and that is the fact that not a single person from the Biden administration came to wait for the fallen Marines!

Our “president” and his VP decided just to laugh while reporters asked them questions about Afghanistan.

Here’s a question for Biden and his regime:

Why are you laughing?

And why aren’t you honoring the lives of our heroes that YOU sacrificed?!

Biden laughs as he has his staff herd away reporters shouting questions about Afghanistan and the 13 US service members who faced death at the hands of terrorists yesterday.

One thought on “Caskets of Fallen Marines Arrive from Afghanistan. No One Bothered to Greet Them”