Can you imagine what some of our nations greatest leaders must be thinking looking down from above? It’s truly sickening and disgusting what liberalism is in America, it’s communism disguised as democracy.

The triggered little snowflakes over at the National Archives have placed a trigger warning on the U.S. Constitution, Declaration of Independence, and other founding documents from our Founding Fathers.

More proof that the Deep State is alive and well in America.

When users click the Alert link, they are redirection to NARA’s “Statement on Potentially Harmful Content.” By doing so, they have also said that they regret having to preserve these historic documents. 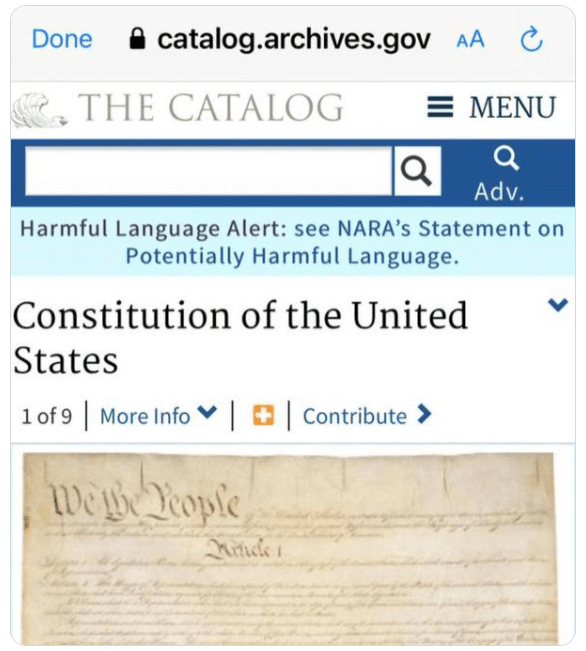 The National Archives have now put a disclaimer on their website that our historical documents may include Harmful Content.

They even slapped this warning on the Constitution.

We tried to tell you the Left wanted to get rid of it! pic.twitter.com/UeJtqgudMm

READ MORE: Donald Trump Jr. Thinks He Knows Why Joe Biden Eats So Much Ice Cream, But Does Nancy Pelosi Also Have a Freezer Full?

They have labeled the founding documents with a  “Harmful Language Alert”  tag. The Archives does not give a specific reason for the label, but this is what they say they give that label for:

In their review, they found that the rotunda of their building is racist. That is because it contains pictures of the Founding Fathers, the original “racists” and oppressors of women and people of color.

This is unbelievable and sickening.. So not only when conservatives take the Congress and Senate back in 2022, taking the White House back in 2024 is pivotal to get these liberal idiot sticks out of our nations government once and for all. Anyone working at the Archives should be replaced at this point.

What are your thoughts America?