Like many Americans, I feel like I’m living in the beginning of a dystopian Scify movie these days. Nothing makes sense, no one is following the science, the media gets caught lying and nothing happens, anyone that questions this bullshit election or this toxic vaccine is a “terrorist” according to this illegitimate regime, and so on.

While I have many personal reasons for why I’ll never inject an untested, experimental “vaccine” into my body, the main reason above all else is simple…I’m not taking the “cure” from the same people that made this virus to kill me in the first place. That’s stupid. We should have hung Fauci for crimes against humanity and dropped a bomb on the Wuhan lab….but instead the media worships a literal evil doctor as a false god, while compromised fake president Biden licks China’s balls for bribes and kickbacks and gives them everything they want.

It’s not that the world is crazy and doesn’t make sense….it makes perfect sense when you realize who’s pulling the strings and why. Truth is billionaire globalists don’t hide how they feel, they are very open about how there are too many people in this world and something has to be “drastically” and radically done. Can you think of a way to do that that doesn’t involve genocide or mass sterilization? Because I can’t.

Then I came across this article from 2018….way before covid or any of the subsequent lockdowns and suspension of rights, and while I currently suspect this whole insane virus/vaccine roll out is meant to thin our herds, take our freedom, and make the elite more powerful….I hadn’t realized that “conspiracy theorists” predicted this exact same scenario before it ever happened. Read these excerpts and you tell me if something sounds familiar: 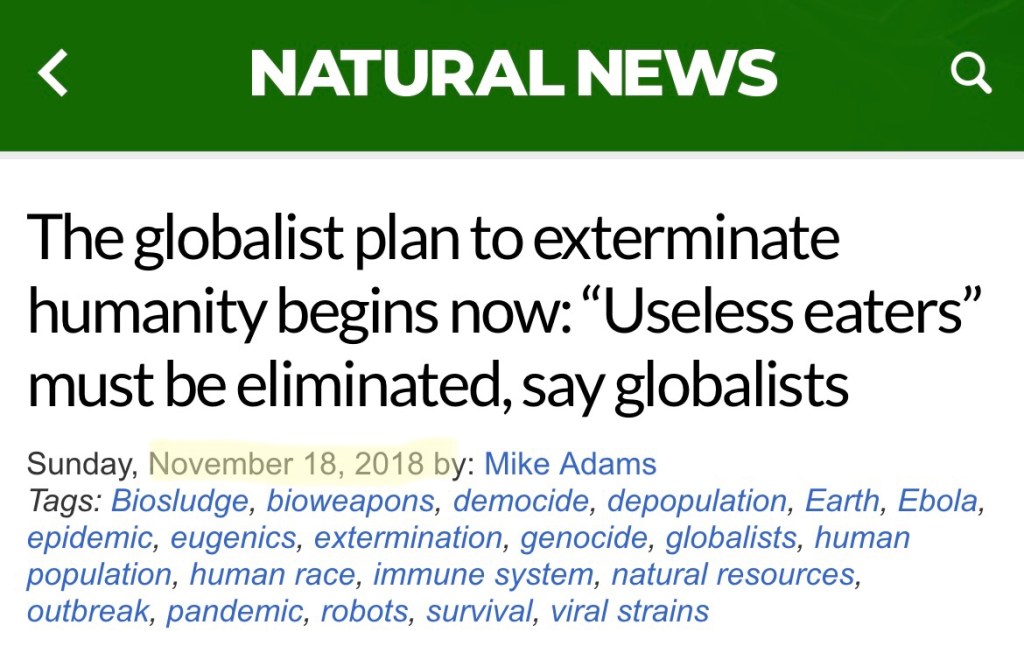 The extermination plan rests on the “accidental / on purpose” release of an engineered bioweapon viral strain. Such bioweapons offer several distinct advantages to extermination efforts, from the point of view of globalists:

1) They are not traceable and are easily released into the population with complete.

2) They are self-replicating. Once the initial population is infected, there’s no need to manufacture more because cellular physiology runs the replication automatically.

3) They exploit the natural social structure of human societies. People will automatically spread the virus because people like to be around other people. Very few people are completely isolated in modern society.

4) They allow globalist governments to declare “pandemic emergencies” and mandate mass vaccinations which, of course, will be laced with additional bioweapons to accelerate the pandemic die-off. As more people become infected from the vaccines, governments will mandate mass vaccination as an “emergency” public health initiative. Those who comply will be infected. Never forget that the mass polio vaccinations of the 1960s and 70s were laced with cancer viruses. This was admitted by the CDC for decades, right up until a few years ago when the CDC scrubbed its website of all such history. Further supporting this realization, UN-approved vaccines administered to women in Kenya have been exhaustively tested in science labs and confirmed be laced with infertility chemicals designed to reduce the population of blacks. See also this story with further details.

5) They tend to more aggressively target low-wage populations and Third World populations, achieving one of the key goals of the globalists which is to wipe out the “useless eaters” as they see them, while maintaining the top 10% of the human population to carry out the science and innovation that globalists see as necessary to protect Earth. In effect, the globalists are carrying out Adolf Hitler’s eugenics “utopia” on a global scale, but instead of merely six million people being exterminated, the globalists seek to eliminate more than six billionpeople.

The other advantage of bioweapons, from the point of view of globalists, is that they do not destroy the ecosystem in the way that nuclear weapons do. Since part of the goal here is the extermination of humans without damaging the ecosystem, bioweapons become the obvious choice, and they can even be tweaked to target specific races such as South Americans, Africans or Europeans.

Aside from the actual name of the disease because it wasn’t a thing yet, this article perfectly describes every otherwise seemingly nonsensical push they are doing with this vaccine. If you didn’t think these people were trying to kill you to steal your shit and “save” the environment before, then you should now. The article also goes into how the powers that be will try to thwart natural remedies and discourage anything that will make them healthy which is also going full steam ahead. A hospital just let a Trump supporter die rather than give her Ivermectin, and the fake news media is happily gloating about it. 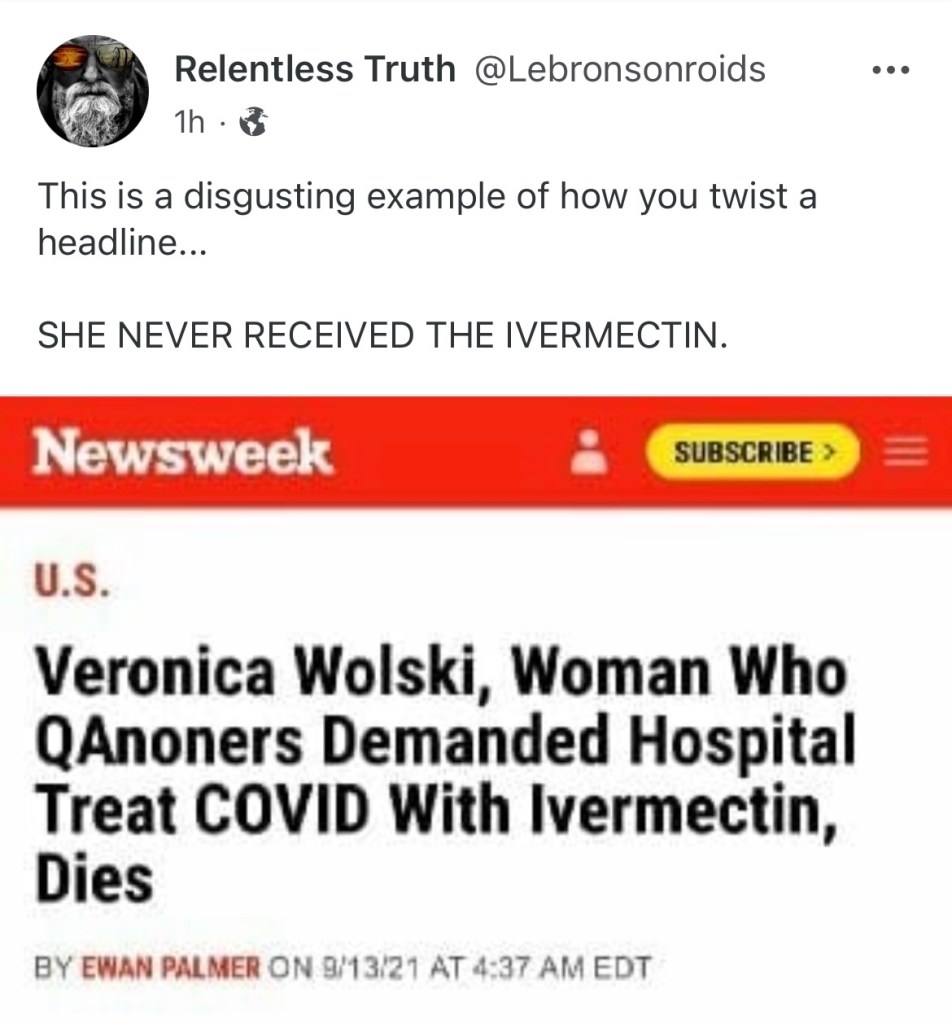 Do whatever you have to do to not take this vaccine. It doesn’t stop the virus, it seems to be making people more sick than anything, Japan just pulled 1.6 million doses for having magnetic metal in it, and if the short term effects don’t kill you….something tells me the long term will. Kamala tweeted this forbidding message out today….you tell me why we need to “protect the vaccinated:” 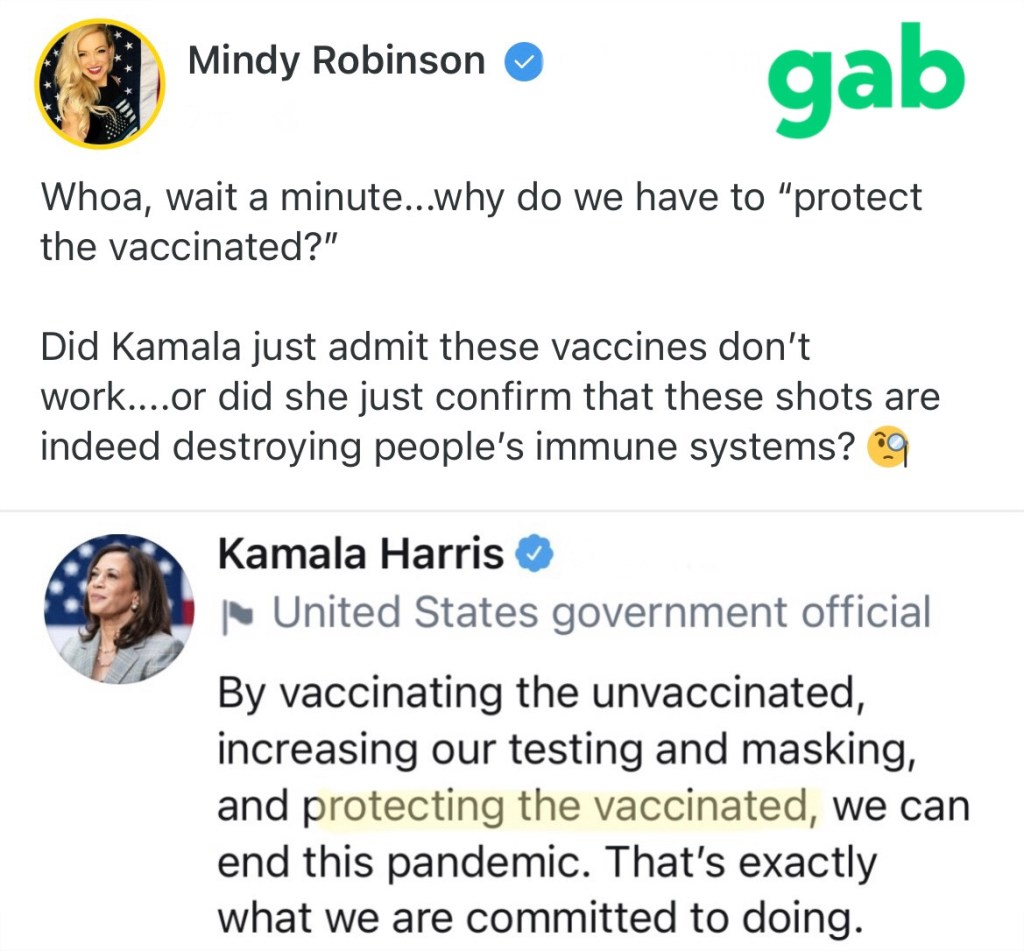 Walk away from your job, pull your kids out of school, prepare for food, water and gas shortages, and don’t worry about paying your bills because the US dollar won’t be worth the paper it’s printed on when all this collapses. Bill Gates and China are the largest owners of farmland in this is country right now….if I were stuck city I’d be scoping out where it it was because that’s the first t he ing we’re repossessing as Americans when this all goes down. Don’t take that death shot.