You have to admit, the fervor in which Californians bonded together to get rid of Newsom and the 10,000 ways he was ripping off the state seemed more than promising. Well….promising in a world where elections can’t be manipulated by the people in charge of counting them. 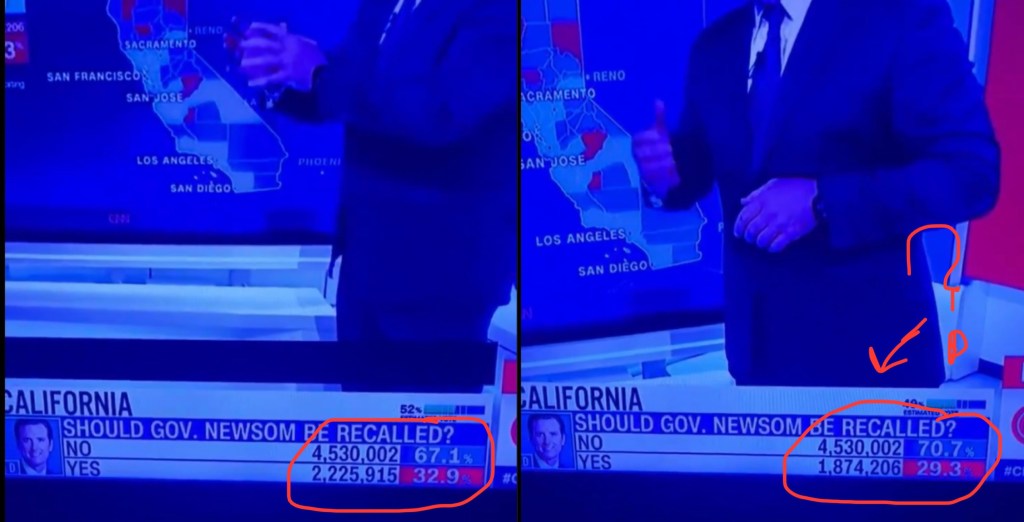 Unless a small meteor wiped out a town in California yesterday that I didn’t know about, I’d really like to know how 351,709 votes got deleted from the recall column on live TV? And perhaps more importantly, how many other times did that happen yesterday that people didn’t catch on camera or that I haven’t seen before writing this article?

If you remember, there were at least 9 separate times on election night 2020 that numbers were deleted or switched on live TV. The counters they use on the news are live streamed from the election department, so if anyone’s messing with it at the software level it should show….depending on when it updates and when they’re displaying it.

Suspect election officials dismissed it away as a “glitch” in 2020, but this glitch only ever benefitted Biden and took votes away from Trump. That’s not a glitch, that’s fraud. There’s also the incident in Antrim county where the machine switched enough votes to effect the outcome for which they explained away as “human error” even though that “error” had to be someone going in the machines or software and illegally messing with it in the first place.

Between this, the mess they made with mail-in ballots, and all the people that were turned away because the system somehow had them down as “already voted” yesterday, it couldn’t be more clear that our entire election system is corrupt and has failed the People. The real question is….what can Americans do when the people in charge of preventing, investigating, and prosecuting election fraud are the same people committing it?